We sat cross-legged on the living room carpet, our chins resting on our fists, staring up at the Zenith.  “Look,” Shannon said.  “It’s the Frinstones.”

Without hesitation, I assumed the role of pronunciation cop for my much younger neighbor.  “Flintstones,” I said, emphasizing the “L” sound.

“Flintstones,” Shannon repeated. I immediately regretted my intervention. How much cuter my four-year-old friend’s mispronunciation sounded.  And what, after all, was the harm?

Indeed, my daughter and I still lapse into in our language when we’re together, much to my husband’s irritation.  Evidently, listening to adult women conversing like babies can grate on one’s nerves. He made me promise to limit our momandkid-speak to times when he is not present. 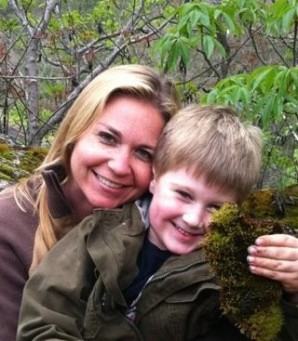 So I understood Kristen’s reluctance to begin working with her seven-year-old son to correct his speech when it had become an impediment to his progress in reading.

There were times when she dealt with his mispronunciations as they arose. I remember babysitting Jackson when he was about two and a half.  His favorite show then was Sponge Bob Square Pants. (It still is.) Jackson pronounced it Funge Bob.  Over time, with Kristen’s help, he learned the proper pronunciation.

When he was five, a more solemn occasion compelled Kristen to correct Jackson’s misinterpretation. Sitting with his mom in church at my brother Bill’s funeral, as the congregation was gathering, Jackson stared up at the altar, and whispered, “Who’s that man on the “T”?

Kristen leaned down and put her lips near his ear. “That’s Jesus.”

“Cheezits?” he whispered back, his eyes wide.

“No, son. Jesus,” she said, choking back a giggle.

But she was less willing to work with him on words she found endearing. “Come here, Mommy. I want to show you sunteen,” he might say.

Then there was the time she picked him up from child care and he kept repeating, “You forgot the blue sheep.” She thought he was referring to a toy, but couldn’t remember him having one that fit that description. Then it dawned on her. The sheep was actually a sheet that he had brought for naptime.

Her favorite Jacksonism was chudders. “Mommy,” he would ask, “why are those people arguing with their chudders?” She admitted that this one stumped her for quite awhile.

But now that he was learning to read, it became important for him to pronounce words correctly so he could learn to sound them out and spell them.  One evening they were reviewing a new list of spelling words. “That’s funny,” Jackson said. “Naybe starts with an ‘M,’ but you say it like an ‘N.’” Kristen’s heart stung at the thought that she had failed her only child by not correcting him sooner. What was once innocent, colorful baby talk had become a hindrance to her son’s ability to learn.

And so Jackson reached another milestone in his development. Now his mom glows with pride when she hears him correct his own speech.  “I mean, some-thing,” he says emphasizing each syllable.

Oh yes, the translation of their chudders?  Kristen finally figured out that this Jacksonism means each other in ordinary, colorless English.